We woke up on our own time this morning. I had set an alarm for 8:00 just in case, but we were both ready to get up just after 7:00. We spent 30 minutes in the fitness center, then showered and had breakfast in the room.

At 9:30 we drove the short distance to Zensations Spa just north of the Java Jazz restaurant we’d enjoyed a few nights before. There we both had amazing 60-minute Lomi Lomi massages – a type neither of us had experienced before. The heavy pressure and long strokes of the massage were just what we needed. We left the spa relaxed and happy.

We had an early lunch on our balcony – I had my leftover ribs. The sun was out and the sky was clear, so we headed to the lounge chairs and soaked in the sun (through 45 sunscreen) while we read and listened to music. 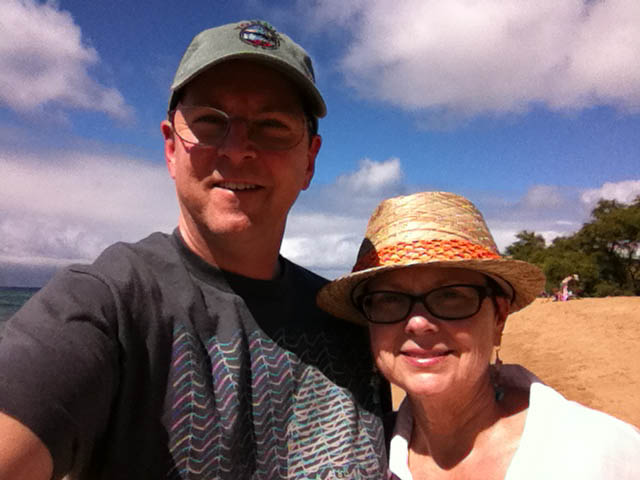 After about an hour, we went for a short walk on the beach and then returned to our sunny spot. About 2:30 we moved to a shadier spot just in case the sunscreen wasn’t quite enough protection. We returned to the room about 4:00.

At 6:15 we went to Duke’s where we each had a Margarita. We then walked to Java Jazz for dinner. There were no tables, so we sat at the bar. Chris had a fancy burrito called a “Fantapano” and I had a hamburger. Both were very good.

The live music started late at nearly 8:00. This time it was a trio of men in their 60’s with two acoustic guitars and an electric base. They introduced themselves as “Old and In the Way.” They sang covers of songs by the Kinks, The Beatles, and other bands from the late 60’s and early 70’s. We listened for a while before walking back to the resort.

Back at the room we watched half of “Pleasantville” before going to bed.