Once again we arose at 6:00am. This time we had a more leisurely time. We had breakfast in our room before setting out once again for Haleakala. We had reserved a ziplining tour through zipline.com. We had driven past our meeting place the day before, so we were pretty sure we could get there.

We stopped at Java Jazz for coffee for Chris and were on our way. The Monday morning traffic was heavier than it had been the day before, but most of it was heading into Lahaina, not away from it as we were.

We made it to Aventure Eco-Tours well ahead of our 9:00 check-in time. We killed time until then and then signed away our right to any sort of recourse should we become injured or killed on our morning’s outing. Fortunately, we would have no need to regret those waivers.

There were only four of us on the tour – us and a couple name Lowrie and Preethi. They were from – wait for it – California. In fact, from Mountain View. It was their first time zip lining and Preethi was pretty nervous.

There were some pretty big differences between this zip line tour and the one Chris and I went on in Whistler 3 years before:

We quickly adjusted to the differences. We had five zip crossings and a cable bridge right out of “Indiana Jones.” The last line was long and steep and had a bizarre and nerve-wracking ending. Instead of landing on a platform, we zipped right past it, coasted back out over the ravine, and then coasted back over the platform. There one of the guides grabbed a foot or two to bring us to a stop. Then he rolled a ladder under us. We climbed to the top of the ladder where he unhooked us. The worst part for me was the ladder. I hate shaky ladders. 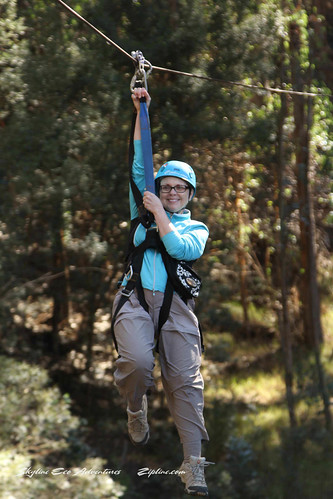 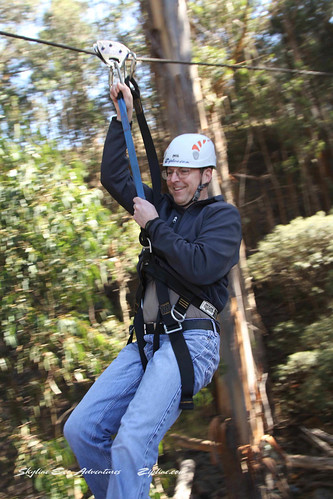 We had a blast! It was just as exciting and fun as we had hoped it would be. We enjoyed talking with Lowrie and Preethi and promised to send them copies of the pictures we took. We took both stills and video.
After the tour, we bought a CD of photos and a hoodie from the tour company. We took another trip to the top of Haleakala and then drove back to our hotel, arriving around 2:30. We ate sandwiches for lunch and then headed to the pool. Unfortunately, there was a heavy mist falling. It made for a lovely bright rainbow clearly visible from our room, but it chased us indoors after about 45 minutes.

We managed to relax in the room as the rainbow got bigger and brighter. At 5:45, we started getting ready for dinner. We easily made it to Duke’s on time for our 6:45 reservation. Chris had the seafood risotto and I ordered BBQ Ribs. We split a salad. Both of the main courses were delicious. We ended up brining a little bit of the risotto and half the ribs back to the room for a later meal.