Thanks to the early bedtime, we awoke a couple of minutes before our alarm went off at 6:00am. We put on our heaviest clothes, grabbed Clif Bars, water bottles, healthy snacks, and the camera gear and were out the door at 6:30.

The first order of business was coffee. There was a coffee maker in the room, but no travel mugs. Google maps told us there was a coffee shop across the road called “Java Jazz”. We drove through a deserted and dark parking lot to the only open place in a nice-looking strip center. A young man out front asked if we were there for breakfast, and we replied “Just coffee.”

The coffee was self-serve, but the restaurant deserved a closer look. There were eclectic decorations everywhere we looked. We were in a hurry this morning, but we’d probably come back for food and more of the atmosphere another time. I paid for the coffee (less than $4 for 2!) and we hit the road south.

Our destination was Holeakala National Park – a 2-hour drive away. We’d be too late for sunrise, but we were hoping to beat the crowds. There was little traffic at that hour, and we made it to the summit visitor center by 9:16 (slowed by a stop at the lower visitor center). As we hoped, there was little traffic going up the hairpin road to the crater. We did see lots of bicyclists coasting down in the other lane. We hoped to avoid dealing with them later. 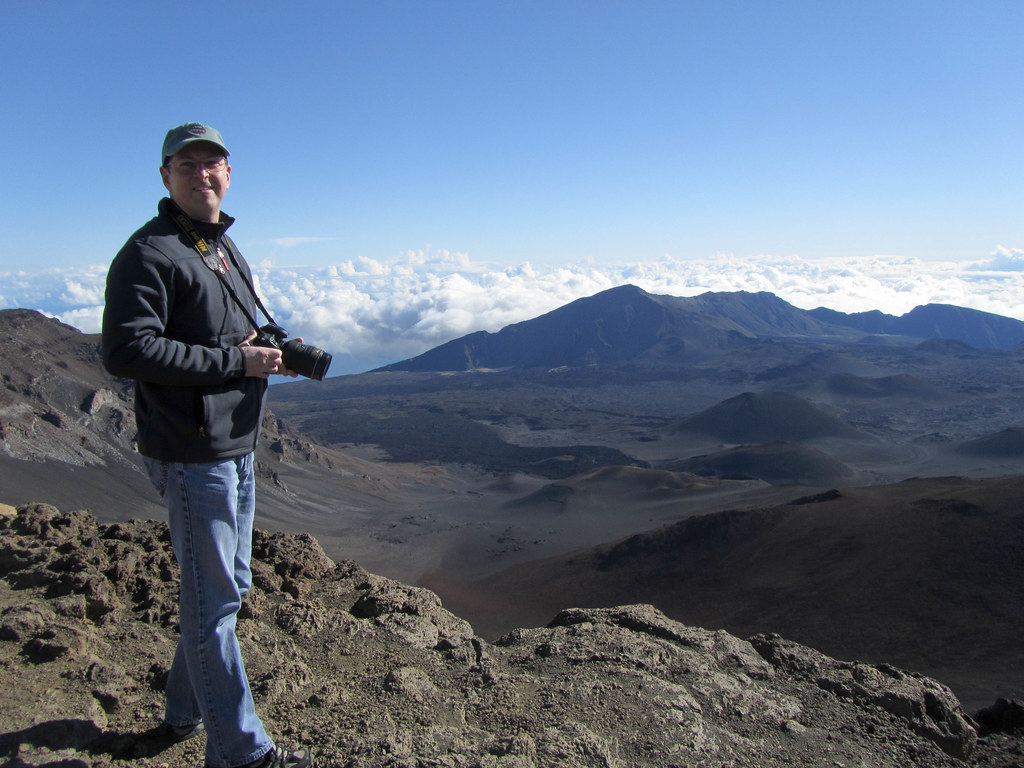 We walked out to one overlook on the way up and were blown away (figuratively) by the scenery and nearly blown away (literally) by the strong wind. At the summit visitor’s center, we walked the short distance to a nearby peak. Views into the crater were stunning. There were clouds below us on the other side of the crater, but the sky was clear and the air was crystalline. We could see Mona Loa 80 miles away and Mona Kea 100 miles away – both on the Big Island.

On our drive back down, we passed one group of cyclists who were on the side of the road posing for a final photo. We stopped for gas ($4.099/gallon) and drove back to our resort. Traffic was still lighter than on our trip from the airport the day before.

We made sandwiches for lunch and ate them on our balcony. We then changed into or bathing suits, slathered on sunscreen, and found a couple of lounges near one of the pools. After about 45 minutes of listening to music and reading, we felt raindrops. We stowed the electronics and prepared to wait it out or run for cover.

We had a respite from the rain after about 15 minutes, but it didn’t last long. Shortly it started pouring, and we went back to our room. An hour later, the sun was out and we found another pair of lounges and read until nearly 5:00 before escaping the wind back to our room.

We relaxed there and then got cleaned up for dinner, and then headed to Duke’s for a cocktail. Chris had a Lava Flow and I had a Kona Red Ale. We chatted with Allan and Nancy, who had taken the barstools next to us. They were an older couple from Sacramento. It seems everyone here is from California.

About 6:45 we walked over to Java Jazz, where we were seated right away. Among the eclectic décor were thousands of Polaroid photos of past patrons, toy trucks, mock shrines to previous presidents, and a chandelier made of about a hundred empty liquor bottles. The menu had a number of tasty-looking main courses. Chris chose the seafood special – ono with shrimp and scallops. I had caramelized salmon. Both were delicious. For dessert, we had the house specialty: a huge serving of tiramisu. 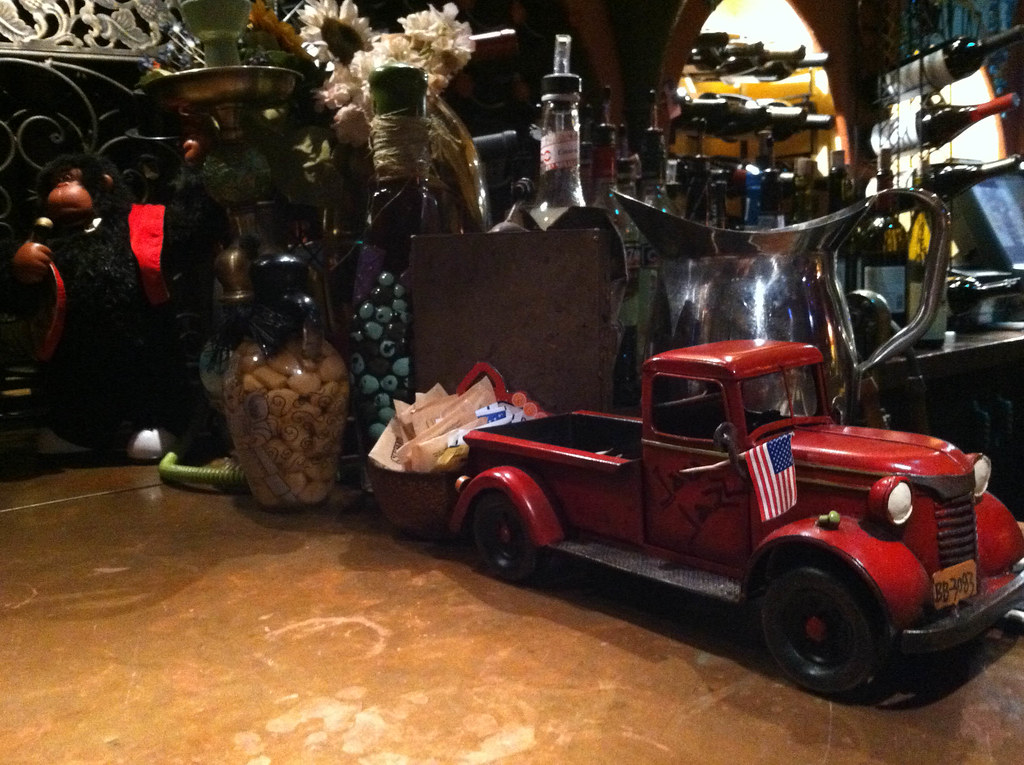 While we ate, we enjoyed the live music provided by a young woman with a nice voice who accompanied herself on acoustic guitar. She sang covers of songs ranging from 90’s indie rock to The Beatles “Black Bird”. On the way out, Chris gave her a tip, mistakenly putting the bill into the singer’s drink instead of the tip jar. Oops.

Back at the room, we finished “Wall-E” and then went to bed.